What are Propositions?...from a Concept Mapping Perspective

Concept maps are graphical tools for organizing and representing knowledge. The smallest unit of knowledge according to Ausubel's cognitive theory (1963, 1968) are "concepts" and "propositions". They are the building blocks for knowledge in any domain. We can use the analogy that concepts are like the atoms of matter and propositions are like the molecules of matter. Understanding concepts and propositions is therefore a key step in learning about concept maps and how to construct good maps. A companion document, What is a Concept? ... from a Concept Mapping Perspective, briefly presents "concepts". This document introduces the idea of "proposition", and explains how to build them.

Propositions are statements about some object or event in the universe (a concept), either naturally occurring or constructed. Propositions contain two or more concepts connected using linking words or phrases to form a meaningful statement. (See the companion document, What are Linking Words? ... from a Concept Mapping Perspective for an introduction to linking words). 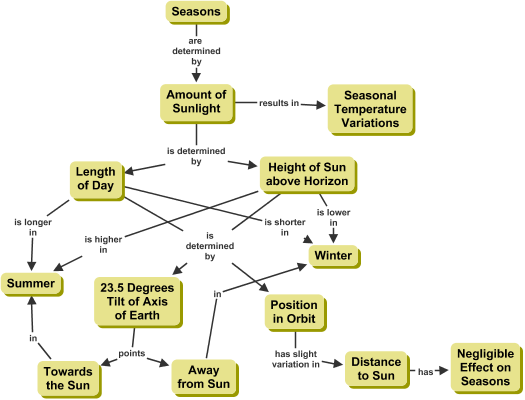 Within a proposition, the linking words express the relationship that exists between the joined concepts in the specific context being considered. The following is a list of propositions from different topics:

Energy is the capacity to do Work

Learning can take place through Apprenticeship

Credibility is the basis for Good Journalism

Increase in Rainfall may cause Flooding

The following is a list of badly formed propositions, since they don't convey any meaning:

What does "Birds in Trees" tell us? Not much. What was the meaning that was meant to be conveyed with this proposition, maybe that "Birds live in Trees"? or that "Birds build Nests in Trees?" Adding a verb (live, build) changes the proposition into a unit of meaning, into a proposition that makes sense on its own and conveys knowledge. The other entries in this list also lack good linking words that better describe the relationship between the corresponding concepts.

Concept maps tend to include mainly static propositions, leading to descriptive maps that don't provide much explanation. When establishing the relationship between concepts, we should make an attempt to describe not only static relationships, but also construct dynamic propositions that result in richer concept maps.

Propositions are not limited to connecting only two concepts. In the above list, "Travel Time is an inverse function of Speed for a Given Distance" included three concepts, "Travel Time", "Speed", and "Given Distance". However, when constructing concept maps we strive to keep propositions as short as possible, preferably connecting only two concepts.