Why the Focus Question?

Starting with a single focus question does not imply that the 'job is done' when that question is answered. Fagundes & Dutra (2006) emphasize in their work with teachers and students the importance of questioning each individual concept in a concept map (do I understand what this concept really means and its relationship with its linked concepts?) This leads to further research and searching, and to the generation of focus questions for other concept maps that may end up linked to the original map.

As a student is building a concept map, the teacher should probe the student to (a) find out how much the student knows about the topic and how his/her understanding evolves, and (b) help the student go deeper into understanding the subject and thereby improve, refine or expand the concept map. Unfortunately, there is little research on question-asking during concept map construction. Chacón (2006) has reported on the "pedagogical question" and its use as a mediating instrument during concept map construction. She refers to three moments during the construction of concept maps: (a) defining the context, where she proposes that questions be asked that help determine the context, such as "Why are we addressing this problem?", "Why use concept maps to solve this problem?", "Where do we find information?" among others; (b) development of the concept map, where the focus question is constructed, inquiry questions such as "where? what? who?" help establish what the student(s) already know, verification questions are used to verify whether propositions in the concept map are true or not and if they are coherent or not, and amplifying questions help find out if information is missing or concepts need to be expanded and crosslinks added; (c) awareness, where through questions the student can take cognizance over how he/she is building his/her Cmap both during map construction and when finishing the construction. Questions at this time are aimed at the metacognition, becoming aware of how the concepts and propositions are build, decision making has taken place, with students offering explanations: "I am describing...", "I am deducing...", "I am establishing a relation...", "I am applying...", "I am assuming..."

The Focus Question and Dynamic vs. Static Knowledge

In a series of studies, Safayeni, Derbentseva and Cañas (2005) have found that the structure of concept maps can be indicative of the level of thinking expressed in the map. For example, concept maps modeled with a circular structure (see Figures 1 and 2) lead to significantly more instances of meaningful or dynamic propositions when compared with concept maps modeled with a tree-like structure. In work presented at the Concept Mapping conferences (Derbentseva, Safayeni, & Cañas, 2004, 2006) they further report on experiments comparing two strategies to encourage the construction of more dynamic relationships: the use of quantifiers on the root concept of a concept map and a dynamic focus question. Interestingly, although a more dynamic focus question has an effect on the nature of the propositions generated, it is adding a “quantifier” to the root of the concept map that has the greatest impact. Although the results of the experiments are preliminary, they report on three methods by which more dynamic thinking can be encouraged: cyclic maps, a dynamic focus question and a quantified root concept. 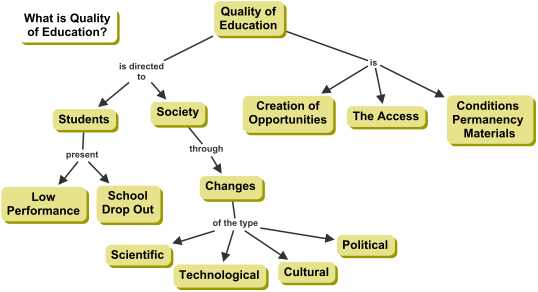 Lets not misinterpret our recommendation for more dynamic concept maps as implying that declarative concept maps are no good and should be avoided. There is room for both types of representations, both declarative and explanatory. A good descriptive map will definitely show understanding by the map builder. We are emphasizing the need to not stop there and move on to also elaborate maps that are more explanatory. 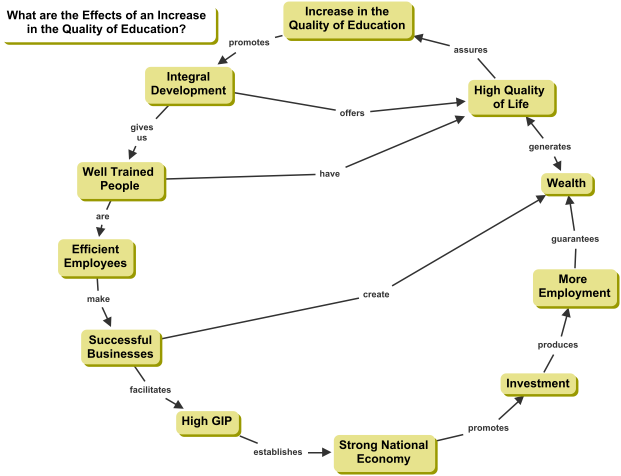 The studies by Safayeni and colleagues serve to illustrate how much we have yet to learn about strategies for optimizing the use of concept maps for the encouragement of high levels of dynamic thinking and meaningful learning. Their work also serves to illustrate the importance of defining and using good focus questions. This has long been recognized, and it is one reason why CmapTools calls for the inclusion of a focus question whenever a concept map is saved. Unfortunately, we often see that concept mappers fail to define a focus question in advance of building a concept map, or they simply ignore the question as their map construction progresses.

This document borrows loosely from the following publications by the authors: